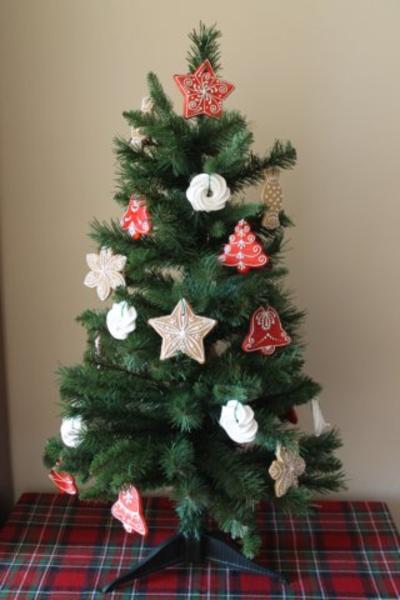 ​​Honey is the main ingredient of our Hungarian gingerbread, which we call honey bread.  Honey is the world's oldest sweetener, and honey bread appeared as soon as man started baking bread.

In ancient times, the Greeks fed gingerbread to the guardian dragon of the temple of Pallas Athena.  If the dragon did not eat the gingerbread, this indicated they would have misfortune. The Greeks also put a piece of gingerbread in the mouth of their dead, so they could sacrifice to Cerberus, the god of the Underworld.

During the Roman Empire, if people wanted their gods' help, they sacrificed their long, braided hair.  But since hair grows slowly, and there are so many things to wish for, they replaced it with a piece of gingerbread in the form of braided hair.

Around this time they also began using pottery molds to form their honey bread.  They made molds shaped like gods, emperors, warlords and scenes from everyday life.  Later, these pottery molds were replaced by wooden molds carved mainly from pear wood.

In Hungary, honey bread first appeared in monasteries, in the castles of aristocrats and among the citizens of royal cities.  It was made in private homes and in the workshops of artisans.

During the Middle Ages, members of the upper classes gave honey bread as gifts during the holidays (such as Christmas, Easter, Pentecost and New Year's) as well as for special events (weddings and christenings.)

In those days, the gingerbread patterns showed a Renaissance and Baroque influence; the themes were mostly religious (mythological scenes, portraits of saints and of monarchs.)
In the 18th century, honey bread became accessible to the inhabitants of any city.  The old religious themes were replaced by secular motifs, like a beautifully dressed man or woman, a newborn or a carriage.

By the beginning of the 19th century, honey bread had reached rural villages.  Gingerbread makers sold their products at markets, fairs and festivals.

During the 1850s icing decoration appeared for the first time in Germany, and then quickly spread to most European countries.

The well-known fairy-tale, Hansel and Gretel, is based on the true story of Katherina Shrader, a famous German gingerbread maker who lived in a forest.  A jealous competing gingerbread maker accused her of being a witch and capturing and eating people.  Katherina did not get convicted but, tragically, the jealous man ended up killing her and pushing her into her hot oven.

During this period, the old cookie molds were replaced by cookie cutters made of metal, although they retained the shapes of the traditional molds.  These new cookies were usually a vividly colored red and decorated with white icing, colored icing roses, mirrors and pictures.  Made by artisans, these decorated cookies held great artistic value.  These decorated honey bread pieces were usually not eaten, but gifted, and kept as decoration and displayed in peoples' homes for a long time.

At the beginning of the 20th century, when sugar began to be mass produced, the art and profession of gingerbread maker started to decline.  Different pastries and cakes took the honey bread's place at markets, fairs and festivals.  Some gingerbread makers switched to making the new pastries, and others kept making honey bread, while adding new techniques and products to their wares.

Today, we can still find some gingerbread workshops in Hungary that continue to preserve the old traditions from generation to generation.  We can still see old, hand-carved pear wood cookie molds hanging on the walls, and we can listen to stories of the gingerbread makers whose ancestors built the workshops.

At the same time, honey bread is again getting very popular in Hungary, with a new generation of gingerbread makers who combine the traditional honey bread with modern techniques of cookie and cake decorating.

Gingerbread is made in many countries, following local traditions.